The late Sun-Times columnist Sydney J. Harris was well known for an occasionally appearing column that probably would not have been nearly as resonant in the Age of Google: “Things I Learned En Route to Looking Up Other Things.” Here’s an example of one of the items in such a column from 1980, courtesy of … what else … a quick Google search:

“If a cat died in ancient Egypt, family members were required to shave off their eyebrows as a sign of mourning.”

(Though you can see why the feature was memorable, it does seem kind of hard to divine the search query that went awry.)

At any rate, I had something of a Sydney J. Harris moment this afternoon while visiting the North Park University Web site. First I stumbled upon a photo gallery of North Park’s first nine presidents, a little short on eyebrow-shaving stories but full of other alumnus-pleasing anecdotes. And then the big payoff: North Park has scanned in every back issue of the student newspaper all the way to 1921-1922, more than 90 years’ worth.

Which of my stories would I try to find? That wasn’t hard to decide: The football game story from 1972 that helped lead to my receiving a delegation of angry football players and angry football coaches one autumn afternoon in the offices of what was then called the North Park College News (now the North Park Press).

The Vikings were only a few years removed from the glory years whose rosters were populated with future NFL draftees and whose exploits peaked in a famous 104-32 victory over North Central. In 1972, however, the offense wasn’t quite so potent when I made the long drive to Decatur for a Saturday afternoon CCIW game against Millikin. (You’ll note that the page also includes an offering from the estimable Gordon Edes, now of ESPNBoston.com; it wasn’t till a year later that my brother Randy joined us on the College News sports staff.)

Herewith my eyewitness report (click to enlarge), relatively free of cobwebs after 40 years. 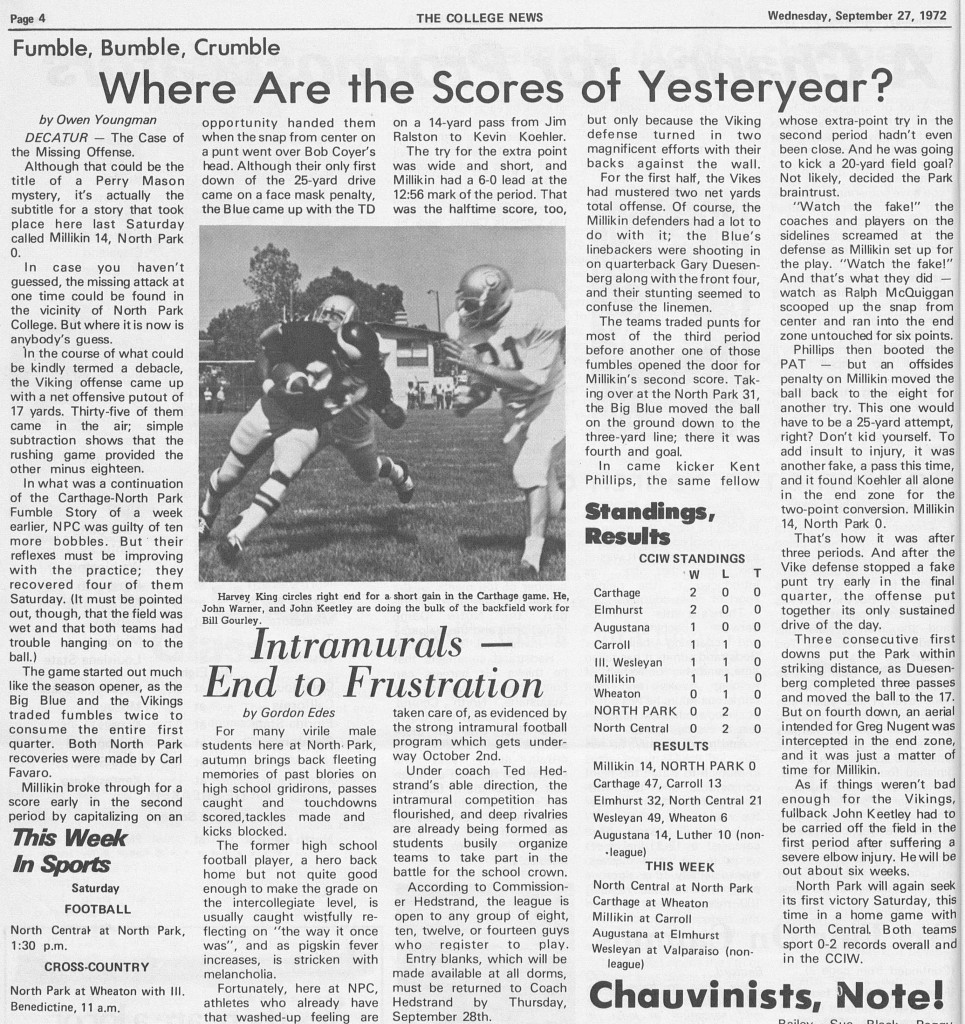 But wait, there’s more. If that weren’t bad enough from the athletic department’s perspective, what came in the Oct. 3 issue (below; again, click to enlarge) questioned not the quality of VIking tackling, but the rationale for Viking spending. “In terms of publicity for the school,” I wrote after analyzing and estimating what it cost to send the lads Downstate, “space in the sports section in easier to come by than most other forms of advertising,” and could lead to alumni who “matched their pride with donations. . . But why the best rooms in town? Why the more expensive form of transportation?”

I guess I’m lucky I escaped with my life.