The paper in question

The millennium arrives: The Tribune turns to eBay for ‘Dewey Defeats Tribune’

We were selling T-shirts with the image – inverted type and all. We had stopped making excuses. Still, we didn’t have a paper. Then I had an idea: start rooting around in America’s attic for a while, among the Beanie Babies.

For several years in the mid-1990’s, this page showed up in the first page of Google results. No more, but I still get inbound links from universities a couple times a year that indicate it somehow wound up in a few syllabi. 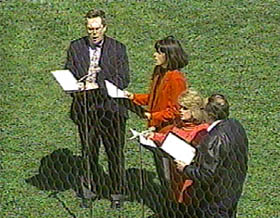 Oh say, did you see?

Hey, it’s kind of jerky, since it has been 14 years since it was converted to QuickTime from a videotape. But you’ll still get a patriotic thrill from this 1998 a cappella rendition of the National Anthem, I just know you will.

My background in advertising

Now it can be told: Slightly before I started reading newspapers, I showed up as a product hawker.

50 Chicago Tribune and Tribune Company digerati gathered on March 14, 2006, at the Arts Club of Chicago to mark the 10th anniversary of the launch of chicago.tribune.com as a full-service digital expression of the newspaper. Randy Belice’s photos capture the event.

A farewell to farms

Two years plus as suburban editor in the Tribune’s metro department were drawing to a close. How to sum them up? Coleridge provided me a model.