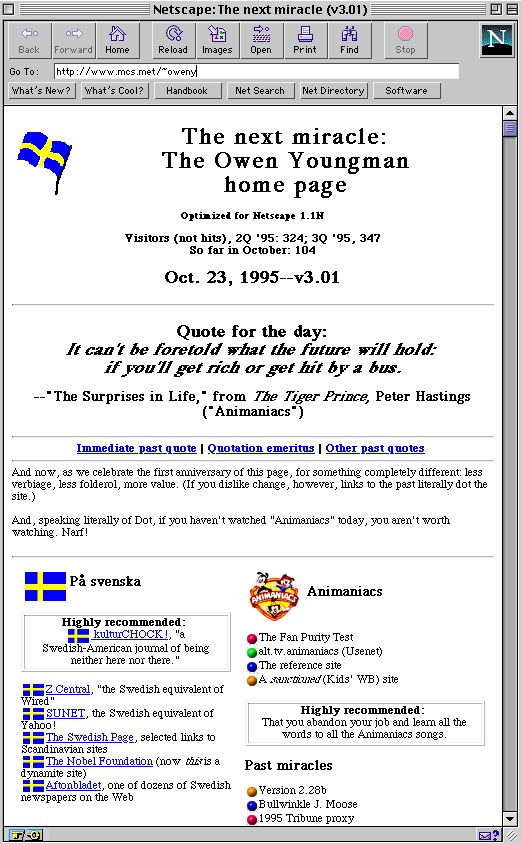 We’re on a journey from Gutenberg to Google to God knows what. – Gregory Favre, ASNE convention, 2008.

I miss civilization, and I want it back. – Marilynne Robinson, “The Death of Adam” [introduction]

When did the ground start to shift?

Was it when I had my first online chat in real time, with Howard Witt in Moscow, back in the 1980s?  Or was it before that, when The Source and CompuServ seemed like good excuses to own a 1200-baud modem?

Was it in the early 1990s, when angry readers of the Tribune business section, unhappy because we had omitted some thinly traded gold stocks in a redesign of the listings pages, found me through AOL and demanded the patching of their morning safety net?

Was it in 1994, when I posted a “home page” on the World Wide Web, using Telnet and Gopher and Eudora and Fetch?

It matters little, since digital tinkering has long ago given way to digital strategy in the halls and bowels of the world’s media businesses.  (Or what passes for digital strategy, or what pass for media businesses.  It was also in 1994 that I heard a European news executive say that, for newspapers, the “information superhighway” was evolving from a zero-million-dollar business to a zero-billion-dollar business.)

I have always sought to expand my own knowledge and then, immediately, someone (and everyone) else’s.  Now that I am a professor, that is my job as well as my aspiration.

That’s pretty straightforward. The ambiguity lies in overcoming the objections of a changing culture to the objectives of a journalist’s craft.

Thanks to all those who have encouraged me as I embark on this new leg of the vertiginous voyage outlined by Gregory Favre above.  Meanwhile, let’s not forget my favorite Swedish proverb, cadged from the back of a cookbook:

“Eat and drink, but do not forget God, death, and the judgment.”

Okay, we won’t forget.  But neither should we merely wait to be judged.  There’s work to do on behalf of journalism, journalists, and journals, work that goes beyond duckbilled platitudes, work that includes each member of the audience.  So let’s stop there, and start right in.

One thought on “The ambiguity is inherent”