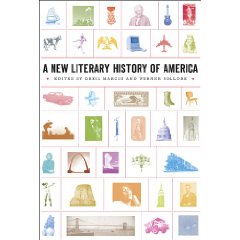 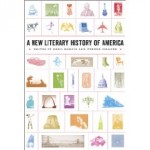 Monday night on the way home from Northwestern, I stopped at the local Borders in order (finally) to act on a pre-Christmas recommendation from Tribune literary editor Liz Taylor: to purchase A New Literary History of America, edited by Greil Marcus and Werner Sollors. Before long I was reading about The Wonderful Wizard of Oz, The Great Gatsby, The Southern Harmony . . . and there were still a thousand pages to pick from. (This timeline is a great thing to scan for a sense of this remarkable compendium of new writing. Fifty bucks list, but with a gift card and a coupon it seemed like a good thing to actually pick up in a bricks-and-mortar store.)

I didn’t want to overdose, though, so after a while I set it down and belatedly picked up Sunday’s edition of the New York Times Book Review. In so doing, I thought I would be transitioning from the past to the present, in addition to reducing the weight of the analog object in hand. 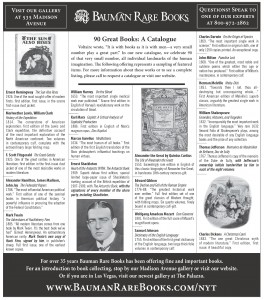 More than meets the eye, or the cursor for that matter.

As it happened, the Book Review was upside down in my stack of unfinished reading, and on the back page was the monthly ad from Bauman Rare Books in New York City. I usually do spend a couple of seconds glancing at the store’s featured offerings, but this week it stopped me cold. And I quote:

It’s not like I had set out to muffle the drumbeats in advance of what turned out to be the Apple iPad. And maybe it was because I had just been reading about Scott and Zelda and Gatsby and Nick Carraway in the New Literary History. For whatever proximate cause, I was thinking not just about the titles or the authors or the cultural resonance of either, but also about the form factor that is part of what transformed these objects into not just collectibles, but representations of the power of words, and of ideas.

At some point, should the Great American Novel ever be written, some substantial number of its readers will absorb it in a form utterly unconnected to such an artifact. Afflicted as they are by permanent partial attention disorder, they will labor doggedly to identify and retain “the good parts” across the multiple brief sessions of hard-won reading time they are able to devote to it. And when their children’s children come across it 30 years after acing their own 21st Century Literature classes, what will be the touchstone that summons up what two sentences on a first edition of Gatsby does today?

Over the stage at Norton Memorial Hall, the opera house on the campus of the Chautauqua Institution, are the words “All passes – Art alone endures.” As a lad, I would annually contemplate this translation from the poet Théophile Gautier (Tout passe. L’art robuste / Seul a l’éternité . . .) as I sat in services or meetings during a week-long family retreat held by the Covenant churches of what was then called the Middle East Conference. The speakers and conferees, of course, had a substantial disagreement with the details of that sentiment, but there it was, overhead, while they spoke and sang to different points below.

No, I didn’t know then it was Gautier, any more than I knew before noon Wednesday that the Apple tablet would be called the iPad, any more than I am able to answer my own question immediately above. I’m already reading on a Kindle and an iPhone; undoubtedly I will before long be reading on an iPad and a Que. But, a digital fellow though I may be, I find myself clinging to an emotional attachment to Bauman’s trove of objects that I never will have or hold.

No, they’re not the art, those objects; Hemingway and Fitzgerald do not endure because of their first-edition dust jackets. But I want to hope that the flash and dazzle of the Next Big Thing does not get in the way of the establishment of the Next Important Thing. And these days, I’m not feeling all too sure.