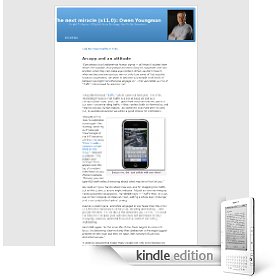 The check was in the mail. I didn't cash it, however.

Drowned out in the buzz about the yet-to-appear Kindle DX a couple of weeks ago was the semi-related announcement that Amazon was opening the gates of remunerated e-publishing not only to newspapers and magazines, but to everyday bloggers.  Among the first to “sell out,” as he headlined it, was my industry colleague Steve Yelvington, who blogs at yelvington.com.

Yes, you now can pay a monthly fee to Amazon.com not just to read the New York Times or LA Times or Chicago Tribune on your current and future Kindle.  You also can pay them to get yelvington.com, although  “I don’t know whether anyone will buy it (and I have my doubts, since the idiot who manages this operation gives away the same content on the Web),” he noted.

Well, us journalist types at the end of the alphabet need to stick together. So as of today version 11.0 of “The next miracle” is also available in a Kindle edition (is that version 11.1?), and the low monthly price of $1.99 “includes wireless delivery via Amazon Whispernet.”

Plus, “Kindle Blogs are auto-delivered wirelessly to your Kindle and updated throughout the day so you can stay current.”

Plus plus, “It’s risk free—all Kindle Blog subscriptions start with a 14-day free trial. You can cancel at any time during the free trial period. If you enjoy your subscription, do nothing and it will automatically continue at the regular monthly price.”

Plus plus plus, I already know how to make money on the Internet!  Just look at the check at the top of this post!

Yes, in early 2000, I succumbed to another e-publishing siren song.  I signed up with MightyWords.com, which billed itself as “a definitive digital marketplace for the written word.” According to Library Journal, MightyWords, which was launched by the evocatively named Fatbrain.com, “offers authors and publishers a new digital channel to read, write, buy, and sell written content, including essays, short stories, chapters, and additional works.”

“By creating the first digital marketplace to read, write, buy, and sell ideas, MightyWords will unleash a wealth of written content and will create a powerful distribution channel that will significantly affect the publishing world,” said Chris MacAskill, Fatbrain.com CEO. Well, who could resist?  Not me.  Even though it was available for free here at owenyoungman.com, I uploaded my 1997 travel essay “From Hong Kong to Hershey:  Or, I Liked the Thick Chocolate Shake More Than the Thick Soup of Snake” and waited for the royalties to roll in.

Sure enough, they did. Before July was over, I had made a sale.  And after the 50-50 split with Fatbrain, I had earned a dollar.

Yes, any company that would write me a one-dollar check definitely had the business model thing down.  And down is how its 23 employees felt when, on Jan. 12, 2002, MightyWords.com shut down and laid them off.

Even though I had never cashed their one-dollar check. “The motivation for closing wasn’t that we’re running out of cash,” said CEO MacAskill, cheerful no doubt about all of us who had decided to treat our checks as souvenirs.  “It’s that the adoption for digital publishing isn’t happening as fast as we hoped.”

Well.  That was then. This is now.  We have the Kindle.  We have the Sony Reader.  We have the PlasticLogic eReader out there on the horizon.  We have fresh reports of Apple’s forthcoming flat tablet.  The time is right to make money with digital content!

See you at the teller window.

One thought on “Adventures in paid content, with actual payment”