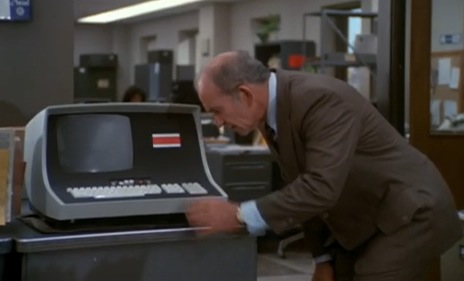 My former Tribune colleague Don Terry, who is reporting these days for the Chicago News Cooperative, has written a feature for the Columbia Journalism Review in which he views the current state of the newspaper business partly through the prism of a 32-year-old television show. As you will have surmised from the headline and image above, that show is “Lou Grant,” which for five years gave viewers a whiff of both The Front Page and the front page.

“Lou Grant” is pretty much the last TV series I ever watched, other than the Steven Spielberg-produced cartoon “Animaniacs.” That I watched it at all was an accident of scheduling: it began airing on Tuesday nights, and I was off from my job in the sports slot on Mondays, Tuesdays, and Wednesdays. That I stayed with it was probably due to the fact that its depiction the fictional Los Angeles Tribune newsroom seemed to get a lot of things right, as I was reminded first by Don’s piece, then by going to Hulu to watch the premiere episode last night.

If you’re interested, it would be far more effective to get the flavor of “Lou” from Don’s piece than to have me recreate a sliver of it, so go there (and you certainly should go there before going to Hulu. Of course, you’d expect me to say that; after all, I downloaded a Hulu player in December of 2007 but had never even fired it up).  From the remove of 32-plus years, though, I was particularly struck by the image above.

Lou is waiting to interview with an old pal for a job that he doesn’t understand will be city editor of the Tribune. Asked to wait, he turns around and comes face to screen with one of those CRT’s that, before too long, would replace the clattering typewriters in the newsroom, but for then was sitting, blank and mute, on a table outside the managing editor’s office.  He pauses.  He bends over.  He reaches to tap its keyboard. (I can’t seem to tell if it’s a Harris or an Atex or an Ontel or some other animal entirely.  He can’t seem to tell if touching it will singe his fingertips.) He looks up at the ME’s secretary, grins sheepishly, and walks away from this “machine,” as he refers to it shortly thereafter.

Before long, in the tradition of large metro newspapers everywhere, he is ensconced at the city desk without the benefit of a moment’s further training beyond that which he brought in the door minutes earlier.  He doesn’t need to be schooled in using that ungainly box, because the skills of his trade are working the phone, smelling the news, and flipping an underreported, overwritten story back at a hotshot reporter.

The good news is, those skills are still important; they are not going to come and go like the ungainly, literally dumb terminal Lou was inspecting above. (Of course, you don’t need quite as supple a wrist for the flipping part as you used to, if you’re quick on the double-click.) I’m thinking I’ll be reminded of other skills not to forget when I fire up the Hulu desktop for Episode 2, perhaps even before another couple years have passed.