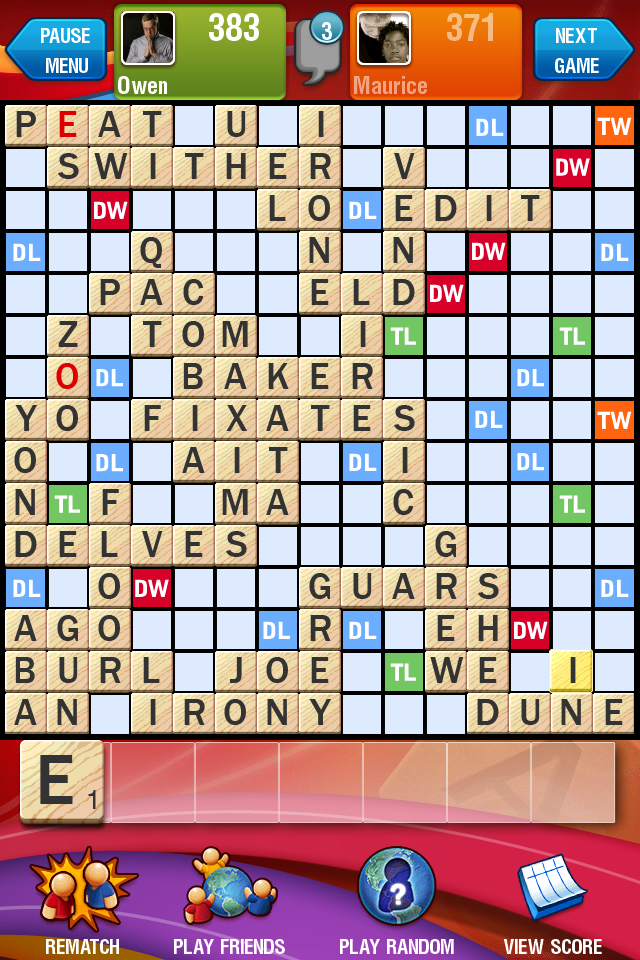 Okay, so we’ve known for a while that “Angry Birds” is chewing up most of the free time that technological efficiency has granted us over the last handful of years. If you’ve been wondering, though, about the rest of this “cognitive surplus” (as Clay Shirky calls it), I have that answer for you. As Alec Baldwin reminded us last month, our stolen minutes are probably going to “Words with Friends” from that newly public behemoth of a social-gaming company, Zynga.

As the world knows, Baldwin’s refusal to “turn off his electronic device” got him kicked off an American Airlines flight last month and became a minor cause célèbre. It led to plenty of jokes, a fair amount of tongue-in-cheek self-loathing, and (of course) a “Saturday Night Live” skit in which Baldwin apologizes to himself on behalf of American. Nevertheless, l’affaire Baldwin is not the only thing that has drawn attention recently to online Scrabble® and its many clones. For instance, there was the fact that the iOS version of “the ultimate word game” was a free “pick of the week” at Starbucks recently . . . necessary, most likely, because while Scrabble may be “ultimate,” it ultimately may be at risk of marginalization.

I must begin by confessing that part of the value proposition that drew me to Facebook, back when I joined in August 2007, was one of the earliest of those clones: Scrabulous, a perfect and perfectly executed online rendition. Within days I was engaged in games with friends (and friends’ children) across the country, in fact using it as an excuse to entice some of them onto the network as well.

You see, I’m always looking for Scrabble opponents. Back in the 1970’s, once I was out of college and working nights in the slot of the Tribune sports desk, the opportunities had dwindled to basically three: (1) my friend Ann, with whom I would play with an agreement not to keep score; (2) me, myself, and I, with whom I would play four-handed Scrabble with the board on a turntable (Linda would come home after work, find me at the kitchen table, and ask, “Which of you is winning?”); and (3) the reason I kept paying my annual Mensa dues: Scrabble by mail with other members.

So now it can be told: It’s not electronic bill-paying or e-cards that are causing the Postal Service to crater. It has to be reduced demand for Scrabble by mail! (While I no longer remember the precise mechanics of, say, “drawing letters” with my pencil pals, I certainly recall staring at the mimeographed game-board grid before filling it in and mailing it off.) 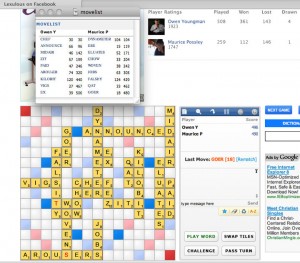 Back to 2007-08. All went swimmingly until Hasbro, the copyright holder, realized it had darn well better assert its intellectual property rights. Over time, Scrabulous’s Indian developers ultimately resurrected it on Facebook under names like “Wordscraper” and “Lexulous,” but with different rules and, most notably, an eight-letter rack of virtual tiles. This last infringement-avoidance attribute led to some amazingly high-scoring games among the 566 I played, many (as in this example) with my old Tribune pal Maurice Possley. But before long I was turning my attention back to “the ultimate word game,” cheerfully paying 99 cents for the iPhone app to go along with the Facebook implementation. 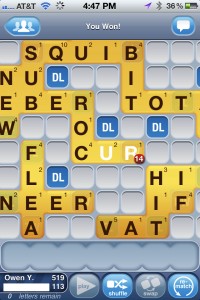 But then along came this “Words with Friends” thing. No, it’s not Scrabble, nor was meant to be. It has a strange board layout that creates ridiculously high scores for boring single words, even bigger gaps between winners and losers (right), and a seemingly odd distribution of letter tiles. In its favor, however: it also has a virtually unlimited supply of opponents . . . nearly 16 million monthly users, 3,406,673 of whom have “liked” it on Facebook, and at last count 153 of whom are numbered among my Facebook friends.

Frankly, I wish they’d all just switch back to Scrabble®. But if they did, what would THAT do to Zynga’s stock price?