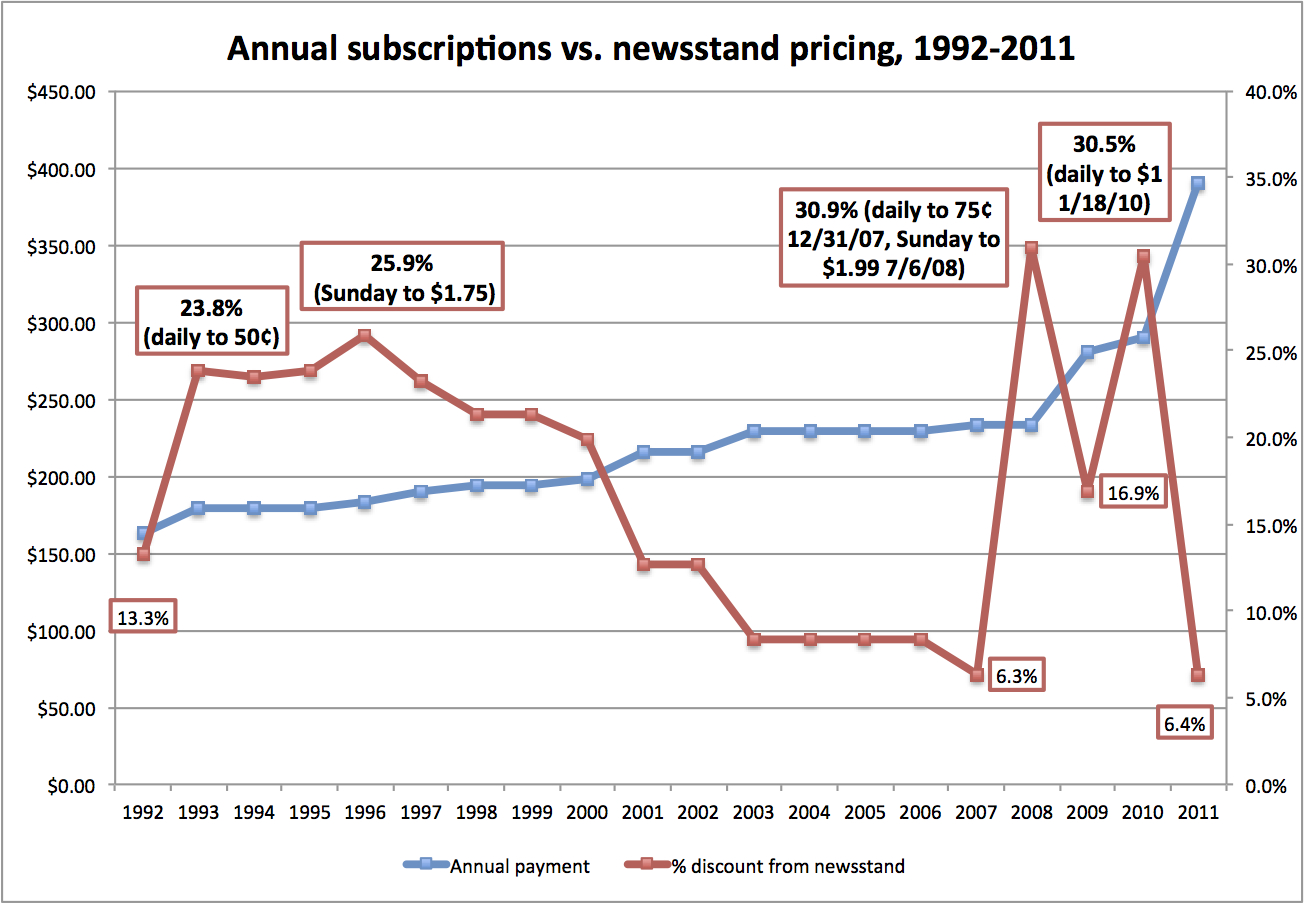 What’s a year of the newspaper worth to you?

This morning, Crain’s Chicago Business quoted me in a story about a possible new books section or supplement under discussion at the Chicago Tribune. Lynne Marek’s reporting indicated that the Tribune hopes to charge separately for it, and she called yesterday to see what I thought.

To expand on the quote she used, I have been saying for a while that the news industry needs to find out what readers want to pay for and do more of it, not just make some changes and hope advertisers will line up in support. Whether a new books section were launched as an add-on to the paper, or as a separate product carrying the Tribune brand, why wouldn’t you seek the answer to that eternal question, “Who will pay?”

In the days when the operative, profitable strategy was to aggregate as much disparate content as possible in order to aggregate as much audience as possible for a range of advertisers, adding a new section “for free” was a viable idea. I did it plenty of times myself. But as advertising dollars flow to disaggregated and targeted niches, news organizations clearly need consumers to pay more . . . and it would be folly merely to charge more for what they’re already doing, or what’s left of it.

Not that charging more is wrong, particularly if you are targeting those who are passionate about the print reading experience. There is a particular conversation I have at every public event, dinner party, charity gala, or board meeting that I attend, and it goes something like this:

Interlocutor: “The Internet is fine, but I need my printed newspaper. I just can’t live without it.”

Professor O: “I understand. I still subscribe to three or four printed newspapers myself.”

Interlocutor: “Do you think they will all go away?”

Professor O: “It probably depends on what you are willing to pay.”

The New York Times has not been shy about finding out what consumers will pay, of course; my annual payment for seven-day service (after credits for vacation stops) went from $550 at the end of 2006 to $700 at the end of 2010 (my quoted rate is $769.60). But as you can see from the graphic at the top of this post, I have way more data — 20 years’ worth, in fact — on my Tribune subscription. And for 17 of those 20 years, home-delivery pricing tracked inflation so closely that the chart isn’t worth showing. (If I may anticipate a potential question, I did not take an employee discount at any time during this period.)

What actually is a little more interesting is the next chart, which compares my annual payments to the “discount” a subscriber received off the newsstand price. This is not a notional number; until moving to the suburbs, I was a newsstand buyer, since my first editor at the Tribune insisted that we buy and read the street-sales edition, not the home-delivered one that had closed hours before the record of the day’s events was complete. The timing of my annual payment, which over time has shifted depending on the Tribune’s internal strategy for changing anniversary dates if there are vacation stops, to some degree accounts for the volatility. But still: 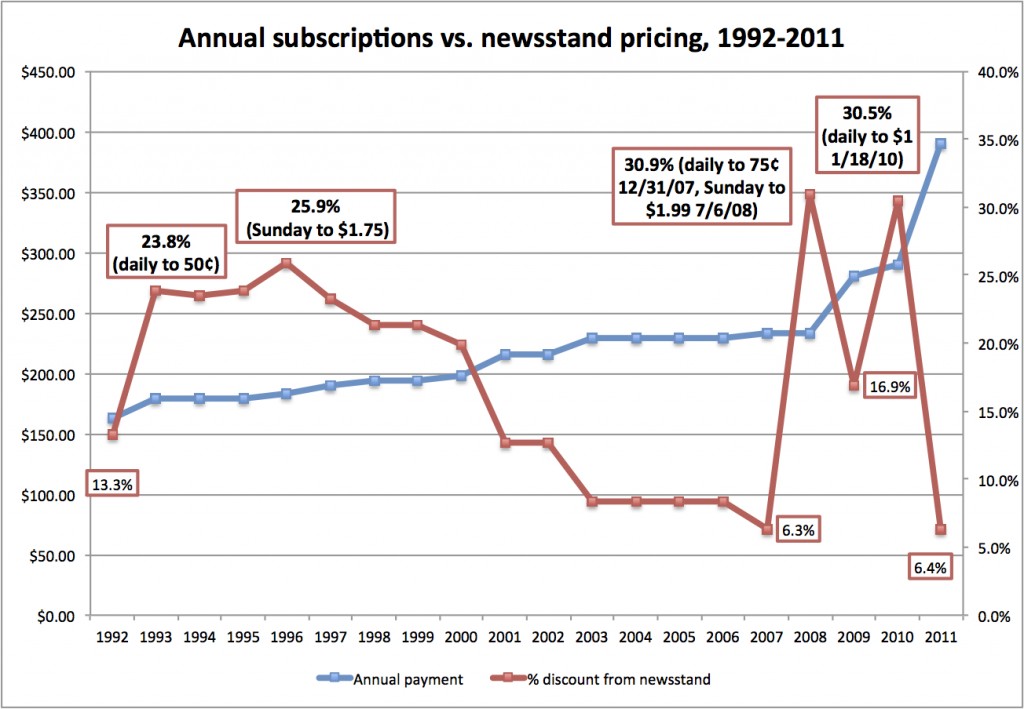 Charge for convenience, or lock in a reliable revenue stream?

When advertising was good (pretty much throughout the 1990’s), there was little reason to worry about the size of the subscriber “discount,” even when the price of the daily and Sunday papers increased significantly. And throughout the early years of the 2000’s, circulators who still remembered the pain of increasing the street-sales price from 35 cents to 50 cents in September, 1992, found equilibrium at or below a 10% differential and stuck with it, trying to retain as many copies as they could, particularly on behalf of preprint advertisers who were paying by the piece. But ultimately the economics had to dictate that, after 15 years, the cover-price status could not be quo, calling the question on how big an increase subscribers might stand for.

The big difference this time around is that with a 20% increase in 2009, and the 35% increase that hit last month, we are seeing an aggressive bet that passion will be more important than pocketbook to a newspaper’s most important audience (seemingly outlandish, preprint-revenue-focused Groupon offers aside). The introduction of the purported pay-as-you-go books section thus would be a variation on that theme.

And one last thing: with this last round of increases, my annual $390 Tribune bill has been uncoupled from the Consumer Price Index. My $162.68 annual subscription payment in 1992 would translate today to $262.36. Formulas like that are likely to be what keeps at least some newspapers, in my interlocutors’ phrase, from “going away.”