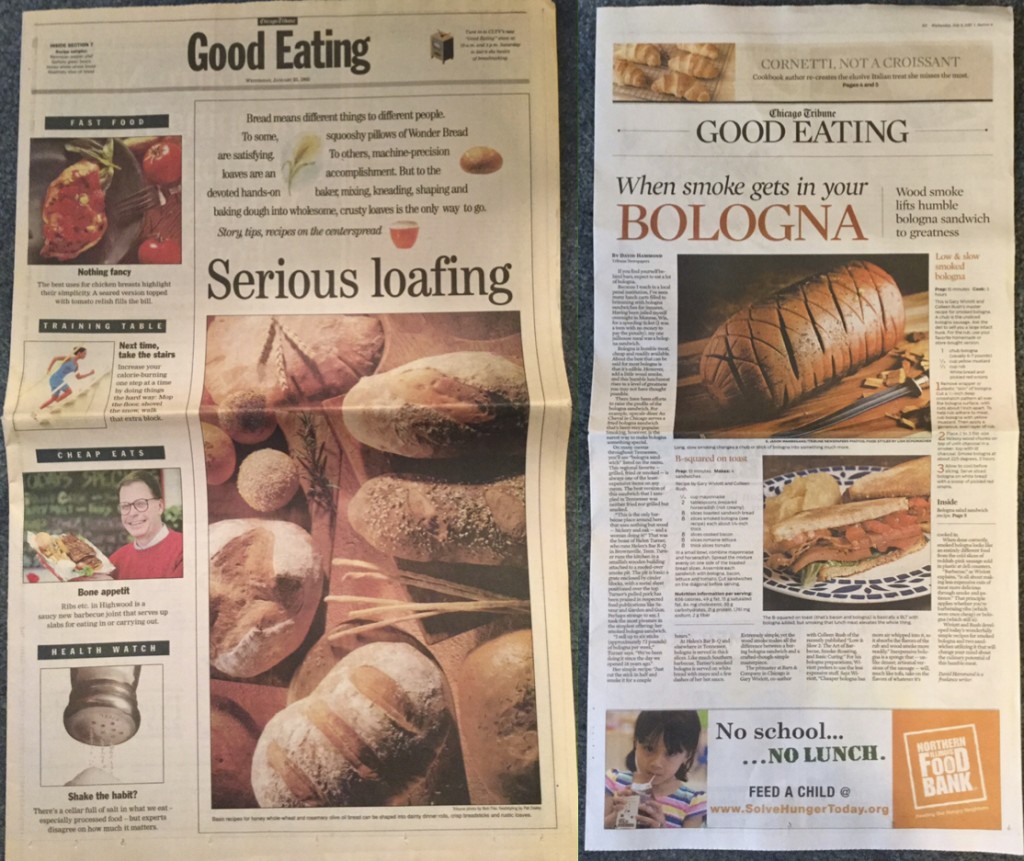 It was snowing in Arlington Heights when the lightning struck.

It was 1994, and I was in a darkened room watching a focus group through a two-way mirror. It was one of 16 such groups I monitored that year in order to learn about Chicagoans’ thoughts about food, cooking, recipes, and nutrition; I was leading a Tribune team charged not just with reinventing the food section, but actually with saving it — and with extending its success beyond print into television and online.

“All I really want,” one suburban mother and cook told the moderator, “is for my husband and kids not to hate what I put on the table.”

That was the lightning bolt. Throughout the rest of that day’s groups, I listened to people differently, focusing less on their activities and more on their motivations. And the next morning, I called a meeting of the project team to make an announcement. From that moment forward, we would not be working on a “better food section” centered on great recipes, the model since 1957. We would be working on a section built around a single idea: success with food. Success, however any reader might define it.

I didn’t know it, but we had stumbled onto a version of what Clayton Christensen was already calling these people’s “job to be done” — one of several things about this food project that would, sooner than any of us could have realized, become crucial we plunged into the Internet business along with the rest of the newspaper industry. The Tribune’s decision to retire the Good Eating name with last week’s issue creates an occasion to evaluate the effort, 21 years after the section launch.

So why did the food section need saving? 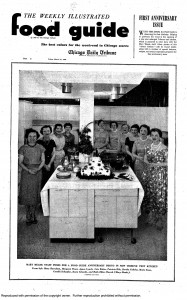 A food section had been one of the first lifestyle-focused weekly features sections added to the Tribune. For decades, recipes and menus from “Mary Meade,” the pseudonymous food editor, had appeared throughout the week — until the “Illustrated Food Guide” debuted on Friday, Feb. 22, 1957. A hit with advertisers and readers, at least according to the photo essays and news stories that started running after its debut, it soon earned a brand new test kitchen that was celebrated in a “first anniversary issue” in March of 1958 (left). Still, restricting almost everything to one day was an unusual idea for a full-service newspaper, so some promotion was necessary: the paper hired half a dozen “Miss Food Guides of Chicagoland” to pass out $5 bills to grocery shoppers whom they saw using the new section in grocery stores.

The section was published on Fridays until March of 1972, when it moved to Thursday along with its voluminous run-of-paper advertising, which came not only from grocery stores large and small, but also from packaged food manufacturers and other consumer products companies. By 1993, however, when I became features editor, the food category had been transformed by a shift in that advertising: not only were there fewer grocers, but they and packaged-good companies were moving their ads into free-standing inserts where they could more easily show products in color (and show more of them).

Advertising in the pages of the Food Guide was down by nearly two-thirds since 1989; even though, thanks to those inserts, midweek revenue for the food category was flat, what it meant to editors and readers was that the number of pages available for photos,  stories, and recipes had shrunk just as dramatically. While readers still bought 25 percent more copies of the paper at newsstands on Thursday — “food day” — than any other weekday, its single-copy circulation of 166,000 was nevertheless down about 11% from five years earlier.

Interviews with advertisers showed that Thursday was too late in the week for their messages, as grocery shopping became an adjunct to commuting instead of a weekly ritual. Secondary research showed that home cooks, who had been turning to magazines for ideas for quite some time, now were starting to look to cable TV as well.

Tribune editor Howard Tyner, who preceded me as features editor, had set the stage by ordering the test kitchen to be rebuilt as a TV studio so that our staff’s work could be showcased on the company’s new local news channel, CLTV. I was hiring staff to build out an editorial presence on Chicago Online, our joint venture with America Online; building something about food seemed interesting, and Tribune Company was an early investor in the online-focused grocery-delivery business, Peapod, which had 7,000 users of its proprietary software in the market.

A menu of change

“Success with food” may have been the animating idea of the changes that became Good Eating, but I think something else proved to be the connective tissue among them. In retrospect, I’d say it was this:

Focus on the user and all else will follow.

If you are a Google watcher (or a former student in one of my MOOCs), you recognize that statement as the first of Google’s “Ten things we know to be true.” Truth be told, newspapers haven’t always been good at this. Though without the benefit of Google wisdom, Good Eating went out of its way to build its change around the jobs of both of its sets of “users” — consumers and advertisers. Here are just 5 examples of what mattered, why, and how.

And, in response to advertiser demand, we created a print section with the unheard-of total of 8 pages of color availability in a 10-page section; created more targeted advertising opportunities by dividing the market into 10 manageable zones, up from 6; and, as noted, moved the section to Wednesday, betting on a big enough increase in circulation to offset declines on Thursday, where single-copy sales were still 25% higher than the rest of the week.

On Jan. 22, 1995, the first TV show aired. On Jan. 25, the first section appeared, full of color and full of ads . . . but, from many readers’ standpoint, woefully short on recipes: The one-column format and the new nutritional information were great, but even readers who liked our new features wanted more of our test-kitchen-tested recipes.

Quickly that was fixed, and within 13 weeks we had our first report on circulation: Wednesday was up 23,661 copies and Thursday was down 17,391 —  up in aggregate at a time when the rest of the week was down. And our move of “food day” from Thursday to Wednesday had forced all our print competitors to move their own sections too, without enough notice to change much of anything.

Within six months, our Gallup research was telling us that the TV show was expanding the reach of the newspaper; 40% of the CLTV audience did not read the printed section. The weekly online chats and message boards were buzzing. And by year’s end we could report that, after five years of decline, advertising in the pages of Good Eating had increased by a million dollars.

During that year, I had turned my attention away from food and to the World Wide Web. In early 1996, chicago.tribune.com launched, dragging Good Eating along with it from what I now called “AOL world.” And I had a final huge lesson to infer from the last project of the old, pre-Internet era as I embarked on the opening efforts of the new age:

In that context, 20 years for Good Eating is a pretty good run. I’d call it success with food.