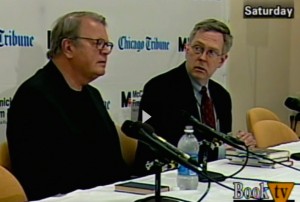 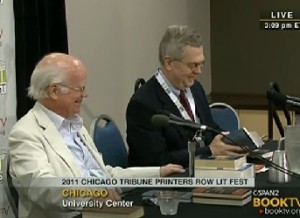 This weekend I’ll be back at the Chicago Tribune’s Printers Row Lit Fest for a conversation with two of my favorite interviews from past years, Garry Wills (above left in 2008) and Martin Marty (above right in 2011; both photos from C-SPAN). The topic at 1 p.m. at Grace Place (tickets required) is “The Future of Pope Francis,” the jumping-off point and focus provided by Wills’ recent book of similar title: The Future of the Catholic Church with Pope Francis (Viking, 2015).

In a retrospective mood after my last essay on finding a time capsule in my closet, I went back through my files to review my past interviews, panels, and discussions; turns out this will be my 24th appearance since 2003. A few categories predominate: faith and religion (8), nature and birds (7), and technology (4) lead the way, with a few individual author interviews and panels mixed in along the way. Authors like Leon Kass, Richard Rhodes, and Umberto Eco also were memorable interviews, and it was always especially fun to just close my Tribune office door and read their books in the weeks beforehand. 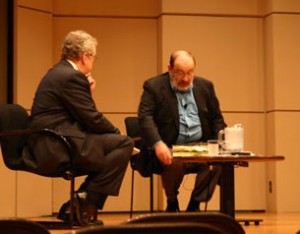 (It’s a front-loaded list: in 2003, the first year after I oversaw the book fair’s acquisition from the Near South Planning Board, I had six sessions on my dance card.  We soon saw that we had just plain scheduled too many authors and too many events, so things settled down in subsequent years, and I’ve been down to no more than 1 or 2 events since I came to Northwestern in 2009.)

The crowds for individual discussions have varied in size but never in enthusiasm, at least from my perspective up front. The most boisterous and focused one? As a matter of fact, it was my first chat with Martin Marty. He and the late Andrew Greeley wowed the crowd at Grace Place in 2004, and they could have kept answering questions from the sitting-on-the-floor-and-standing-room crowd  all afternoon and evening if we hadn’t needed to clean up the place for the resident congregation to use the next day (see below).

So, back to Grace Place on Saturday. Perhaps I’ll see you there.

WIth Martin Marty and Andrew Greeley, 2004