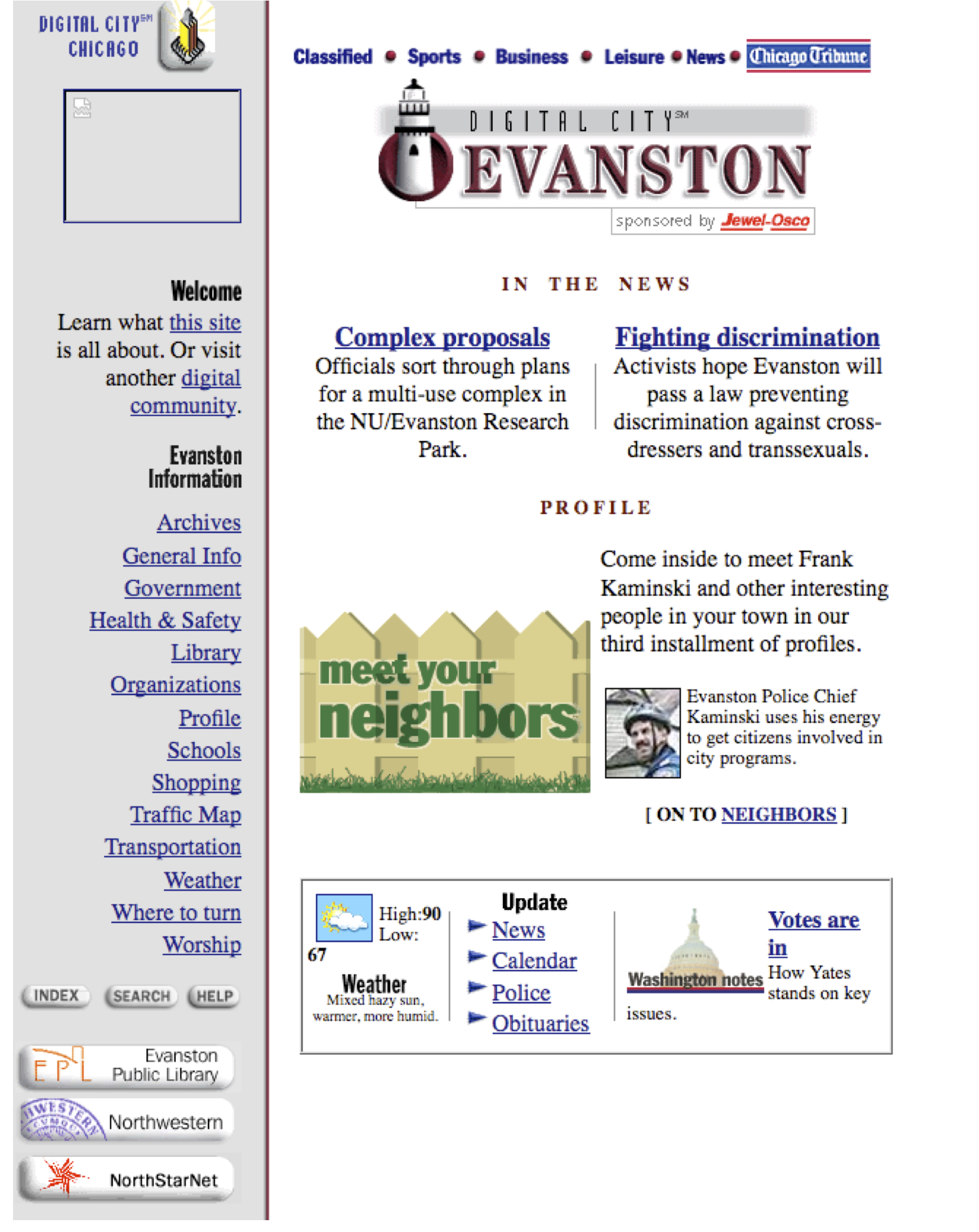 Back in the fall of 1996, I was immersed in publishing hyperlocal news on the Internet. I just didn’t know it.

As you might suspect, a principal reason I didn’t know is that, inside Chicago Tribune Digital Publishing, we were calling Digital City Arlington Heights and Digital City Evanston something else: “virtual communities.” (Why? Because our 1995 strategic planning documents had called them that.) In fact, the word “hyperlocal” had yet to appear in either the Tribune or the New York Times . . . and when it did, each paper first used it in a story about television news (NYT, 7/14/97; CT, 12/24/98).

Well, that was then. By now, across this great land of ours, tens of thousands of Web sites and blogs focusing on news and information at the neighborhood, community, or suburban level have arrived (and in many cases departed), fully embracing their hyperlocalness. (Hmm. “Blogs.” Another coinage that hadn’t made the Tribune yet by then, although in researching this post I found an amazingly prescient piece about them by Julia Keller in September of 1999 that’s worth a detour.) Tens of millions of dollars have been expended to build these hyperlocal sites; some fraction of that amount has even been recouped in advertising.

And still the impetus to build new ones, operate them, and change the course of hyperlocal history has never been stronger, if we are to judge by the Patches and Triblocals of this world. So this quarter’s Community Media / Interactive Innovation Project course at Medill, with financial support from the Chicago Community Trust, took as its charge to research, understand, and propose new paths for hyperlocal news, technology, content, and advertising.  Medill Professor Rich Gordon has led the effort; now, as the quarter is nearing an end, the results and the recommendations are starting to roll in.

Not that I’m going to give away (yet) the innovations that these 15 graduate journalism students have created and are in the process of promulgating.  I will, however, tell you that

(Oh, why “Local Fourth”? As the site’s “About” page puts it, “Our name, Local Fourth, is an attempt to localize the ‘fourth estate’ — a reference to newspapers and community members serving a watchdog role.”)

I realized as I was getting ready for this quarter that I have been involved in some form of hyperlocal news in the Chicago area for nearly 30 years now, going back to a stint overseeing prep sports at the Suburban Trib at the beginning of the 1980s, continuing through a tour of duty as suburban editor of the Tribune, launching 17 suburb-level Digital City sites in the mid- to late 1990s, and finally overseeing the launch of Triblocal and Triblocal.com before I departed Trib Tower for the ivory tower in 2008. That makes me especially excited by the work that has been done this quarter.

Or should I have said it makes me especially hyper?