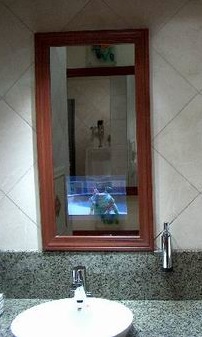 I suppose that every day is a good day to talk about how and whether the journalistic enterprise will remain commercially viable as the world turns in these days of our lives, or indeed whether all my children can recover from their financial ailments, be released from the General Hospital, and find a guiding light to lead them to the promised land of free cash flow. Progress on “new business models,” however, seems to move along at about the same pace as a soap opera plot – even though hardly a day passes without an announcement that someone is going to try something new, or someone else is going to essay something old in a new way.

Indeed it was thus on Thursday, a day when I opened the New York Times to read about the plans by the folks behind Politico to compete online with the Washington Post on local news. And I was actually in a good spot to keep thinking about their admission that they didn’t know how the Web economics might work; since the dean of Medill, John Lavine, had another commitment, I was at Harvard, sitting in at an “executive session” on, ahem, news business models.

Entitled “How to Make Money in News: New Business Models for the 21st Century,” the event gathered an intentionally small group at the Charles Hotel in Cambridge: about 20 panelists for the day’s three discussions, and about 30 additional participants on hand both to listen and to take part. Alex Jones, director of the Joan Shorenstein Center on the Press, Politics, and Public Policy, and author most recently of Losing the News: The Future of the News that Feeds Democracy, was the convener.

As it turned out, the three panels were so packed with speakers with something to say  that many of us other participants – who sat in chairs ringing a central square of tables where the panelists faced one other – got in our licks à la mode du 21ème siècle: 140 characters at a time.

Now, granted, this may not have been optimal.  In her prepared remarks, MIT’s legendary Sherry Turkle – generously not calling attention to anyone seated behind her or on the flanks – pointed to the substantial body of research that shows “your ability for any single task goes down when you multitask. No matter how much we want to jump on the bandwagon, multitasking degrades performance.”

I therefore must cop to the fact that none of my listening, note-taking, or tweeting were as good as they might have been. On the other hand, I must also say that those of us who were intermittently posting and reading got a window in what an additional 10 people were thinking, were piecing together, or were valuing as interesting (or, in some cases, not thinking, not piecing, not valuing). If you’re interested, you can recreate the moment by searching Twitter for the hashtags #Shorenstein and #newsmoney, with far more at the former; I certainly won’t get to all the sound bites here. My own tweetstream is at twitter.com/YoungOwen. 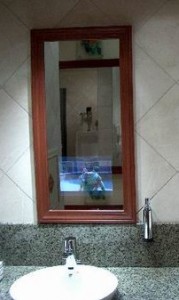 (Oh, while we’re on the subject of multitasking, staying at the Charles Hotel provided me with a new model.  I guess they’ve been around since 2006 or so, but the Charles’ bathrooms feature “in-mirror TV’s” from a company called Séura, whose web site explains, “Enhanced color correcting technology allows the LCD picture to appear when on, while flawlessly concealing the screen behind a bright reflection when off.” Turkle, I am sure, would rightly caution us that there is a risk of degrading the quality of one’s ablutions in the process.)

Turkle’s actual multitasking point, by the way, was centered on how journalists should choose their methods and channels of communicating. “Newspaper reading creates a ‘reading space’ that journalism occupies,” she said. “The teenagers I study leave us with a profound question: Will we be able to have journalism when we don’t have newspapers to appear in? Reading on the Web, if it is all you do, does not favor complex lines of thought. So the implication for news is to stay with narratives that need to be read with all one’s attention.”

One thing that you had to like about Turkle’s ideas is that they grow out of actual research with 13-to-25-year-olds (these are the years she now defines as “adolescent”).  This fact means that they resonated very well with comments on the morning’s first panel from David Levy, director of the Reuters Institute for the Study of Journalism, who labeled himself the only non-American researcher at the table. He shared six observations, but Nos. 2 and 3 that caught my attention in a way similar to that Turkle would accomplish an hour later.

Observation No. 2 was about the supply of news, and that moving forward, fulfilling of the conference imperative of divining How to Make Money in News would require moving away from a supply focus to one on demand, which was Observation No. 3: “We need better research on demand as a precondition for finding new business models.” How about that: we need to understand the audience’s needs, not our own desire to perpetuate ourselves.  “Let’s focus on the purpose of journalism,” he went on, “not jobs for journalists.” (David Westphal of USC, tweeting after the meeting since he was one of the panelists, also echoed the research point. “One gnawing feeling after #Shorenstein conference: Our business does so little research.”)

As even this cursory spin through a few speakers and a couple hundred tweets shows, this was not a conference where a new answer was provided to the How-to-Make-Money conundrum. (The old answers were nodded to, of course: Serve the elite, or serve the lowest common denominator.) Across the room at the meta-conference, a few of my fellow tweeters began observing the absence of a breakthrough before the day was half spent.

At least the people at the table took the point that those of us here in congress assembled were not fully representative even of those in the broader culture grappling with the questions since we were a “New York Times-reading, NPR-listening crowd.” As fellow-participant-and-tweeter Alan Mutter points out today over at Reflections of a Newsosaur, “Next time, we need to hear from people we don’t know, exploring things we don’t know about and examining potentially useful solutions we have yet to consider. I was neither the first nor the only one in the room to note that the overwhelming number of conferees were white men well past the age of 45.”

That said, it at least was a crowd capable of memorable images.  “This is the pre-Cambrian era of the Web,” said Doc Searls of the Berkman Center for Internet & Society, after first holding forth on a couple of somewhat later epochs–the Enlightenment and the Industrial Revolution. “Think of Facebook as a trilobyte, and Huffington Post as a sort of early sponge.” (As is often the case when fretting newsies meet, HuffPo came up more than once, but here the hand-wringing and clucking was more fun than usual. “Arianna admits it’s a parasitic model,” said Politics Daily editor  Melinda Henneberger, who used to work for Huffington. “But if your model is parasitic and the host dies, then where are you?” Mutter noted that all the HuffPo bashing at least seemed to make people feel better.)

I shall not undertake the fool’s errand of distilling all the panelists’ thoughts into a grand prescription.  Even the panel on “New Models for News, In Practice” after all was largely about terrific enterprises that, each year, are losing less money than the year before.

So, a hypothesis, not a prescription: The new ideas and new models must be inferred from the gaps in Thursday’s discussion, not noted down from the transcripts.  The biggest gap is clearly an understanding of what will be valuable to tomorrow’s audiences and underwriters, and therefore valuable enough for someone to pay to support. Let’s have research, not rhetoric, and let’s have it abundantly.

There’s another conference coming up next month, at Yale: “Journalism and the New Media Ecology: Who Will Pay the Messengers?” That one is funded by the Knight Law and Media Program and Information Society Project, lasts two days, and has a different set of panelists.

Perhaps they also will have some different research into not just who will pay, but why they should.