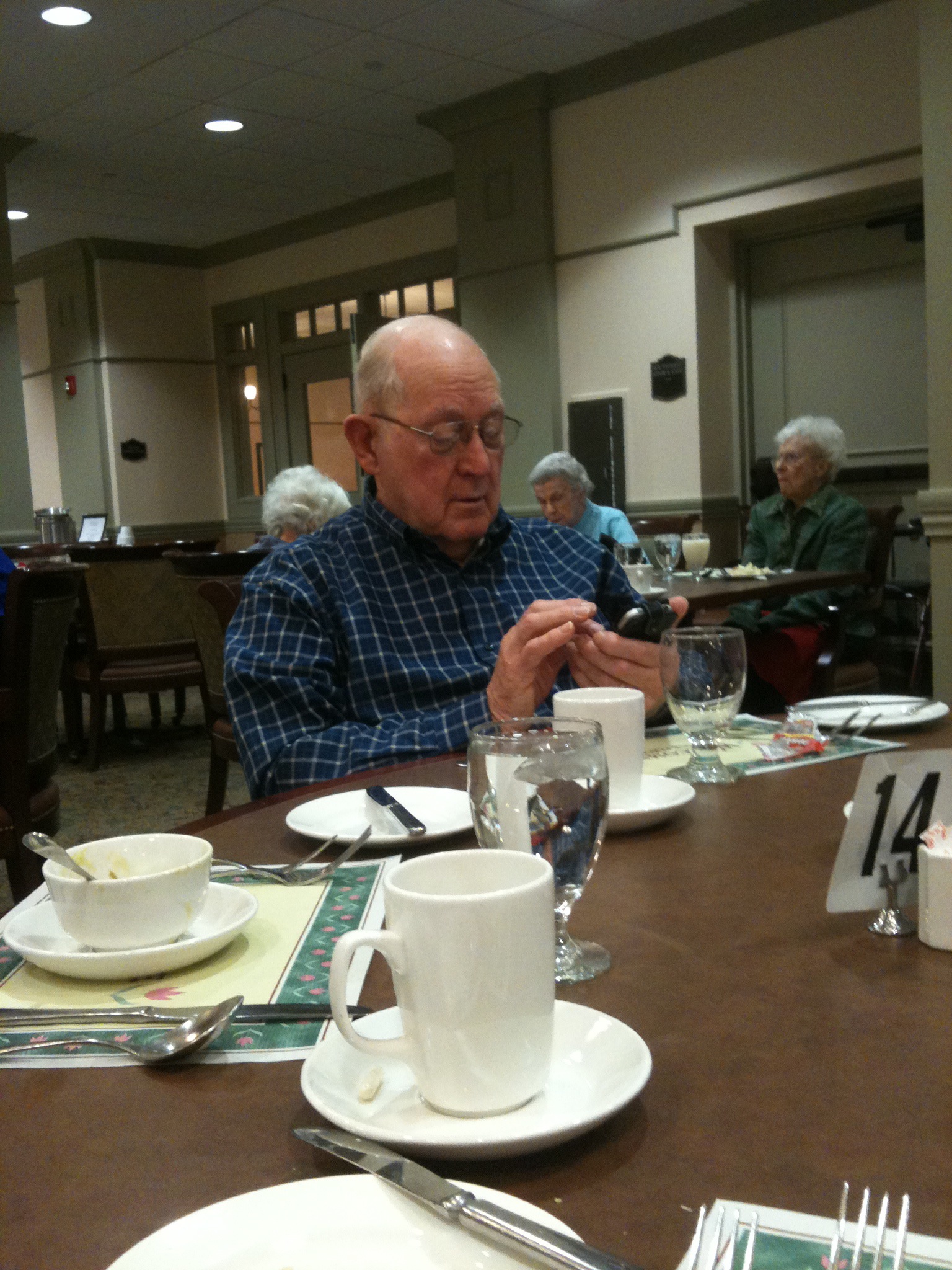 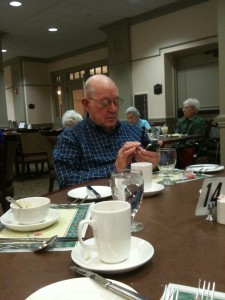 My father turned 80 on Saturday, and my sister and I and our spouses went out to The Holmstad, my parents’ retirement community in Batavia, for the occasion. Shortly after 5, we were in the Holmstad dining room, the 6 of us armed with our 5 iPhones and high expectations for a festive meal.

Festive meals can, of course, take a while to arrive; so, as photo opportunities go, the one at right was way easier to seize than most. When I grabbed this image with my iPhone camera, I suspected that all I had to do was write the right caption, upload it to Facebook, and wait for my thousand or so Facebook friends to decide if they, too, found it interesting.

“Dad checks Facebook on his iPhone while waiting for 80th birthday dinner to arrive….”

It was just a few minutes after 5 p.m. By the time we got home from Symphony Center (where we went after the birthday bash ended), it had more interaction than any other single thing I’d ever posted on Facebook. “Awesome,” wrote Don. “Dad rocks,” noted Marie. “So that’s the old block off of which you are a chip,” observed Eric.

And then there were all the folks merely clicking Facebook’s thumbs-up “Like” icon. It should be noted that many of them don’t even know him!

It had already been a big day online in Owen World; a very complimentary link from Scot McKnight’s popular beliefnet.com blog, “Jesus Creed,” was sending my Feb. 27 essay on past and future literary artifacts into the top 5 of my posts over the last year. (Scot drove about 4% of my overall traffic in 2009, and at this rate he’s going to achieve his tongue-in-cheek goal of sending me more readers than does Northwestern.)

So is an octogenarian iPhone-ing Facebooker really all that noteworthy? As Linda observed at home tonight, people born in 1930 have had to adapt to changes that are in many ways more dramatic and less incremental then any of us younger whippersnappers. Television, for one. Church-run retirement homes with waitstaffs and Starbucks counters, for two.

So what are you waiting for, gentle readers? Get your dads and moms their own smart phones and social network accounts. And then send them to owenyoungman.com.