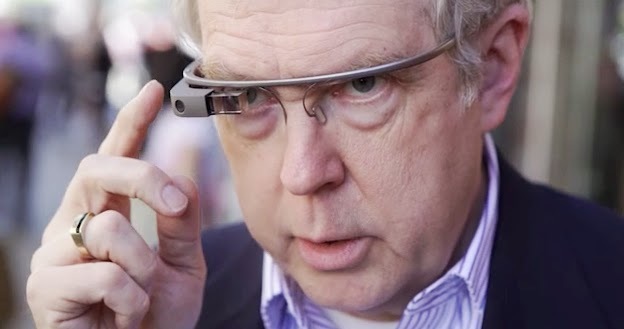 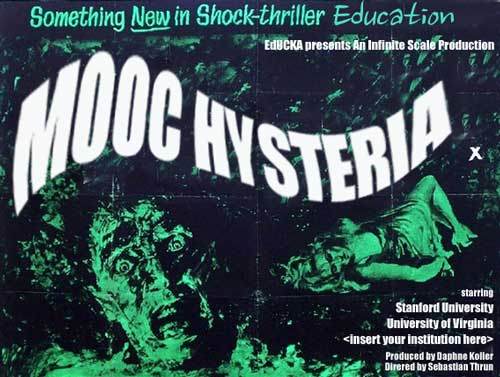 Friday when I went by my office at Medill, I found this image taped to the doorjamb. One of my colleagues had cheerfully appended a headline: “OWEN YOUNGMAN: A MAN AND HIS MOOC.”

Either that, or by the looks of it, a man transfixed by what he sees through his Google Glass.

In either event, two days earlier I had taken to social media to note that the long path to launching “my” (and Medill’s, and Northwestern’s) first massively open online course had briefly wound from a thicket into a clearing. The team from NUIT NUAMPS ( the Northwestern University Advanced Media Production Studio) had finished capturing my last planned Google+ Hangout-based interview, the last of more than 20 planned video elements. The night before, we’d confirmed a Sept. 16 launch date for the six-week course.

Though I noted the milestones on Twitter and Facebook, too, Google+ seemed to be the key venue for the message. After all, it is a class that uses Google as a gateway into the frequently fraught field of 21st Century media. Jeff Jarvis noticed and helped carry the news from Ghent to Aix and wherever else the 3 million people who have him in Google+ circles might be located. 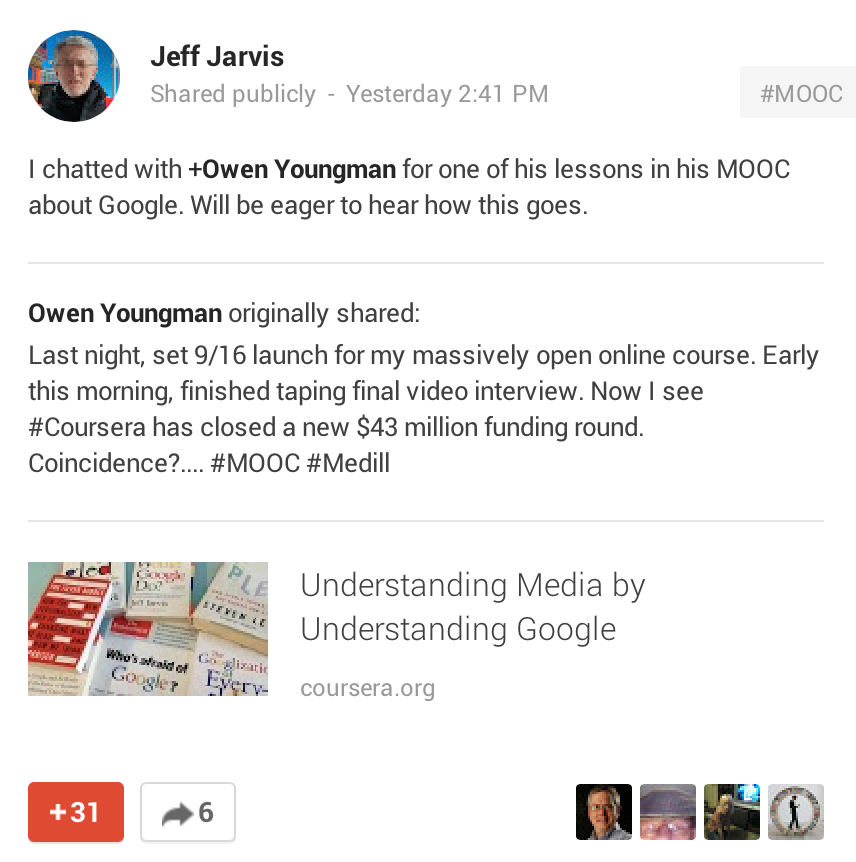 Jeff, author of course of What Would Google Do?, is indeed one of the people who agreed to hang out with me in the front of my equally massive virtual classroom (literally; we recorded a Google+ Hangout). I also talked to Siva Vaidhyanathan (The Googlization of Everything); got an OK from Steven Levy (In the Plex) to condense our two 2012 public conversations on campus; interviewed University Library specialist Charlotte Cubbage; and talked to Ted Shergalis of the digital marketing firm [x+1].

The last time I wrote about the MOOC, three months ago, was to look at some insights I had gleaned from about 1,000 of the 13,000 people who had registered so far. Not long afterward, Coursera paused registrations of all courses without official start dates, and so the decision to move forward on Sept. 16 started the enrollment dial spinning again. We’re closing in on 20,000, with another 7,500 people having put us on an eBay-like “watch list.”

As it happened, during the same hour when I was filming the aforementioned last piece of video, Coursera was announcing that it had completed a $43 million round of venture funding and intends to double its staff size. There are already 4 million registered users eyeing 400 courses from 83 universities, so my 20,000 has some room to grow itself.

Stay tuned, then, for the next installment of MOOC Hysteria. Me, with the lectures out of the way, I’m going back to editing quiz questions: The class may be free, but you still have to prove to me that you’re paying attention.