The Glass Chronicles, II: Land of Stares and Sharing

I’ve never seen that before — have you? Maybe we should take a picture….

Commencement comes late to Northwestern. I mean, was anybody else in America actually hanging around school last week? For example, by the time I got to Medill for its two convocations on Saturday, it had been six weeks since I attended graduation ceremonies in historic Hinkle Fieldhouse at Butler University, where nephew Tim has been pursuing his master’s degree in music composition.

This year’s wait wound up being beneficial, however, due to an accident of timing. Graduation arrived just 3 days after Google Glass, giving your intrepid reporter a chance to try it out in a large crowd at a substantial public event and pursue the answers to a few carefully selected questions:

To the first question, I leave it for others. To the last, I can report that I’m still standing. As to the intervening queries:

When I wasn’t posing for random Instagram photos, I had plenty of interesting discussions with interesting and interested people about potential journalism use cases, something about which I am continuing to think when I’m not thinking about finishing the lectures for my Coursera MOOC. They couldn’t help but notice Glass, but I barely was aware I had it on, as it did not obstruct my field of vision at all.

And, like many early-generation technology products, Glass is good at what it’s good at. Opportunely enough, right now it seems engineered so that, rather than be bad at something else, it just doesn’t try to go too far beyond that list– and that’s part of the point of being a “Glass Explorer”: Our expressed ideas and our inferred experiences will shape what gets developed next. 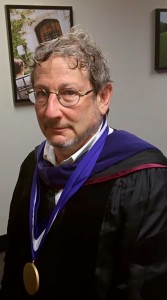 So taking photos and videos is dead simple, as is sharing such items on Twitter or Facebook (and of course Google+, where not surprisingly they are synced privately without intervention). Nephew Tim, observing from Indianapolis, noticed the same thing I did: the photo quality is really quite good, as in this snapshot of my next-door neighbor professor, interim associate dean Jack Doppelt, which has been gathering “likes” on Facebook from the moment I posted it.

Emailing and texting and making phone calls, easy once one’s contacts are properly configured. Searching Google? Easy and utilitarian: Searching for “Northwestern University” yielded a map and an offer to make a phone call. And the central navigation devices on Glass — a series of “cards,” available by swiping a finger along the touchpad built into the right temple — both keeps track of everything you’ve done and guesses what you might want to do next, courtesy of Google Now. (As I said in my earlier post, the more Google knows about me, the better Glass is likely to perform. These are the tradeoffs that try men’s souls.)

All of which yielded plenty of Glassified tweets, status updates, photos, and videos, as well as a blog post here and there. Here’s my favorite, though, from  within the crowd at the afternoon graduate student convocation, where I received a last-minute request to lead the crowd in Cahn Auditorium in the Northwestern alma mater.  Hey, the music is Brahms and the band put it into a key that was reasonably low, so why not?

Well, an auditorium is generally the right-sized room for my voice.