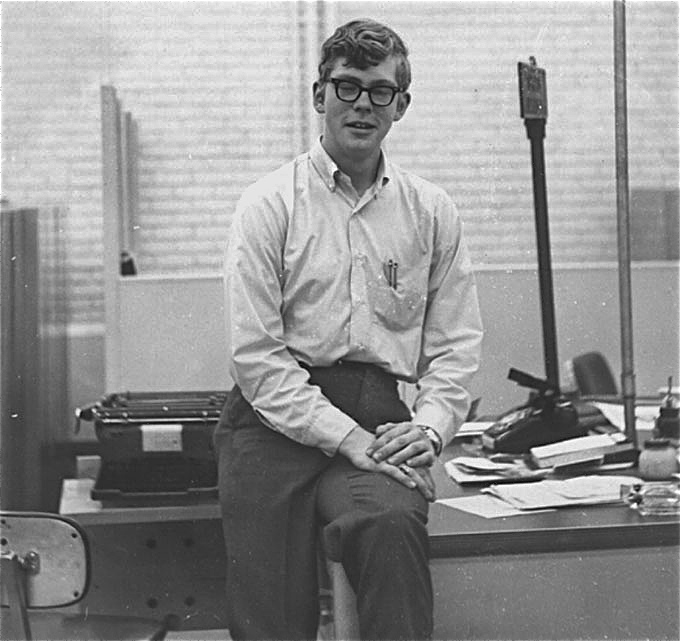 My first pay stub came with a motto: "Support those who support the Star-Beacon." Still true today.

There used to be lots of jobs, good jobs, in the newspaper business.

I had one. It paid me $1.60 an hour, which meant if I stayed really busy on the weekends and in the evenings, I might make $60 before taxes. Pretty good for a high school kid.

How good? In 2009 dollars, the government’s CPI calculator tells me, that would be about $353.  More than gas money.  More than a paper route. 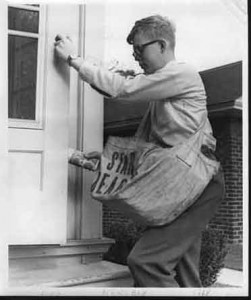 It was the Ashtabula Star-Beacon, a 6-day-a-week P.M. paper.  And, in fact, earlier in the fall, I had indeed been delivering it. I even wound up on the cover of its annual “salute to carriers” special section (right). I actually hadn’t been a paperboy all that long, as it took me far too long to learn to ride a bicycle.  But my route, fairly close to my house and the high school, was a decent way to get me out of the library and into the out-of-doors, and like I said, the Star-Beacon was a P.M., so even at the age of 16, I was still doing it. (The kids who delivered the Cleveland Plain Dealer had to get up waaaay too early in the morning.)

In November, though, the sports editor of the Star-Beacon called Tony Chiacchiero, football coach and head guidance counselor at Ashtabula High School, looking for someone to work part-time covering games and taking photos.  I had spent the previous two football seasons as statistician for the Panther football team, traipsing up and down the sidelines with a clipboard – a job that Coach Chiacchiero had given me because, in his completely accurate guidance-counselor estimation, I could use a little socialization.

“I have just the kid,” the coach said.  Or words to that effect. 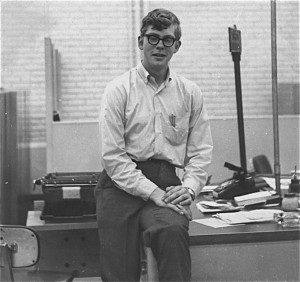 Sitting atop the world of northeastern Ohio sports journalism, circa 1970

So I turned in my paper punch and my ring of subscription cards and got a key to the building, a press pass, a decal for the windshield of my 1966 Buick Skylark, and a couple of drawers in one of the two desks that constituted the Star-Beacon sports department. (At left: there I am, with my eyes closed, sitting on a corner of that desk.)

The rest is, if not history, at least too long a story to tell here.  I did tell one perhaps amusing part of it in a story that ran in the Star-Beacon in April of 2005, but suffice it to say that I stayed at the Star-Beacon until the end of August, 1971, when I headed off to Chicago, to attend North Park College and to be a copy boy at the Chicago Tribune.

Yes indeed, there were good jobs in the newspaper industry then, too.  I had one. It paid me $2.40 an hour.

A 50% raise.  No wonder I decided to stick with this line of work for a few more years.