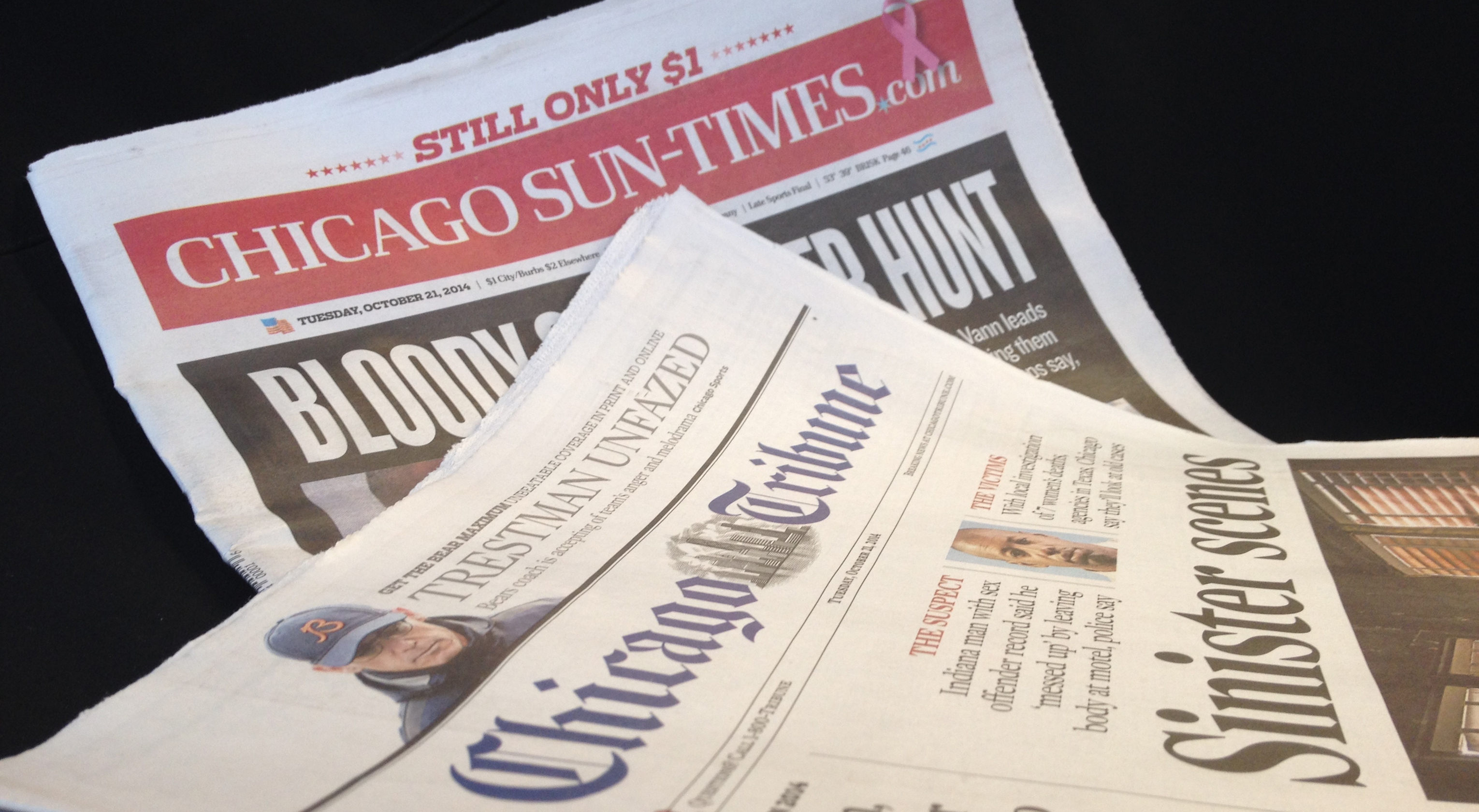 Last Thursday, people in the Chicago media business had some news to make them sit up straight, if not stand up and run screaming from the room.

Michael Ferro, whose investment group Wrapports took control of the Sun-Times in 2011, closed a deal to become the largest shareholder in Tribune Publishing, owner of the Los Angeles Times, San Diego Union-Tribune, and many other titles.

Including, not incidentally, the Chicago Tribune. If the city’s downtown dailies were keeping their relationship status up to date on Facebook, they’d both have switched to “It’s complicated.” (And they would start seeing different ads in their Facebook timelines’ right-hand rails.)

So, what’s up with all this?, Chicago journalists wanted to know. Some of the wondering reporters found their way to my inbox and my voicemail – no surprise given the 37 years I spent at the Tribune before coming to Medill in 2009. The markets didn’t seem happy, but that seemed mostly to be about Tribune Publishing’s eliminating its dividend. And I did give a few interviews — to Crain’s, to the Daily Herald, to WBEZ (no link), and to WLS (starts at 39:28 of the audio stream of the 2/7 edition of “Connected to Chicago”).

But for now, here are a handful of comments you can make when your Uncle Fred from Orland Park calls you up for an explanation, once he gets last Friday’s paper out of the bushes next to his driveway. All you need are the numbered points, but I’ll give you some backup too.

Ferro’s $44.4 million investment gives him 16.6% of Tribune Publishing and he cannot acquire more than 25%, at least for a while. That makes him the biggest shareholder and entitles him to the job of “nonexecutive chairman,” but he’s not yet The Owner in the Rupert Murdoch/Sam Zell/Citizen Kane sense. Or even the Robert R. McCormick/Marshall Field sense. (Feb. 24 addendum / emendation / correction: With CEO Jack Griffin out, replaced by a Ferro insider, I guess he’s acting like The Owner after all — though The Owner of the whole enterprise as long as it’s an enterprise.) (March 1 addendum: I take it all back.) (March 2 addendum: And now Ferro is “donating his ownership stake in the Chicago Sun-Times to a charitable trust to avoid perceived conflicts of interest.”)

There is still little perceptible long-term future for the smaller paper in any of America’s dwindling number of multiple-newspaper cities. The future of the larger paper in these towns is hardly assured, but its Doomsday Clock is not yet at 23:57, despite what new chairman Bruce Sagan told the Sun-Times newsroom. (Okay, perhaps there is now a new version of a consolidation option that was less obvious before the deal, but that never has been off the table given items 5 and 6 below.)

Some of America’s most visible news startups actually are treating their Web sites as “legacy media” whose best days are behind them, so fast is the shift to mobile devices. (One of them was on campus last week and said so.) In order to support the number of journalists necessary to cover Chicago (or L.A.), a viable consumer revenue strategy is needed online as well as off, and this cash infusion from Ferro may buy the company a somewhat longer runway as it implements the metered paywall plan it announced in November.

The list is shorter than it was 40, 30, or 20 years ago, but Chicagoland still is home to the Daily Herald, the Northwest Herald (no relation), the Kane County Chronicle (5 days in print and a Monday e-edition), and the many suburban titles owned by the Tribune or formerly owned by the Sun-Times; also see item 6.

Why? In large part because the extra revenue at the Tribune — once estimated at $70 million a year, down to $30 million last year according to the SEC filing about Ferro’s ownership stake — and the reduced expense at the Sun-Times helped provide the cash to sustain many more jobs in both shops than could otherwise have happened, though also see No. 6. (Which is not to say this is any consolation to the printers, pressmen, and drivers who lost their jobs while some journalists retained theirs.)

First off, the fact that these properties changed hands without too much regulatory pushback – with the price, $23.5 million, far below the Hart-Scott-Rodino antitrust thresholds – is an indication that a mere investment that values all of Tribune Publishing, not just Chicago, at $265 million, is unlikely to raise significant eyebrows. (A week later, TribPub’s market capitalization is down to $150 million, by the way.)

And second, the rebalancing of expense and revenue in the printing-and-distribution agreements, mentioned above, figures to have helped both parties get to today in something like their current forms.

Daily Herald high school sports content, a strength, has been appearing in the Sun-Times since August. Sun-Times pro sports content, a necessity, has been appearing in the Herald since September. Reporters and readers may tend to romanticize the world of the “The Front Page,” where reporters hid under desks and inside garbage cans to steal one another’s scoops (and where, somewhat less romantically, circulation wars actually involved “guns, blackjacks, and brass knuckles,” as the Tribune put it in a retrospective during its 150th anniversary year in 1997) – but today’s reality is one where, in order to do good work in one area, a publisher may choose not to compete in another.

It’s fascinating, it’s long, and it might not leave you feeling cheerful, but it’s must reading. Here is the link: http://www.chicagomag.com/Chicago-Magazine/November-2013/michael-ferro/

Since I left the Tribune, a week never goes by when I’m not asked a version of this question. (Yes, I know the Sun-Times is primarily a street sales newspaper, so go ahead and buy it at Starbucks or Jewel every day if you want.) Newspapers need their readers to help them make a bigger dent in the declines they’re seeing in ad revenue. But you should know that even this strategy will not guarantee that a daily newspaper will remain a 7-days-a-week “daily” for an indefinite period (cf. Cleveland, Portland, Detroit, New Orleans . . .)

And yes, the rate will go up, including at the newsstand. The days when newspapers (and magazines, to some degree) kept their circulation prices down in order to maximize the raw number of subscribers are long over, especially given that Google has proven that millions of audiences of one are more valuable to advertisers than one audience of millions. Newspapers will need their readers to pay in proportion to the value they place on them.

You actually can help to control one of printdom’s two most reliable remaining revenue streams (the other one being death notices): Clip a few coupons. Consumer-products advertisers have been looking for a digital path to the 50 million people they reach weekly with newspaper inserts for two decades now, but until they find one, they are providing the patient with some much-needed oxygen several days a week.

Got it? If so, I’ll start routing my calls your way.